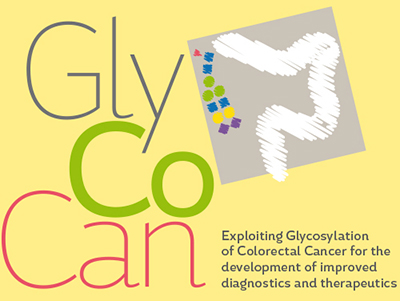 Colorectal cancer (CRC) is a major worldwide cancer burden with about 1.4 million cases in 2012 and an annual mortality of approximately 700,000. Early detection is crucial as treatment is most efficient in early stages where population based screenings could substantially reduce incidence and mortality. The molecular mechanisms leading to the formation of different antigens suggested as CRC biomarkers and potential therapeutic targets are poorly understood, especially with regard to carbohydrate-based molecules, such as glycans. Enhancing our understanding of the structure-function relationship of glycosylation in CRC could lead to the discovery of improved diagnostic and prognostic biomarkers and pave the way for nov-el therapeutic targets.
Building on an established network of analysts with many years of experience in (glyco)proteomics and biomarker research, in collaboration with colleagues in the field of glycobiology and glyco-immunology, GlyCoCan will develop new methods, and use current state of the art methods, to investigate the role of glycosylation in many different aspects of CRC.